"我喜欢叔叔把我举过头顶，这样我能感觉到他的力量，我觉得他就是一个力大无比的神仙” --Jason
Translation: "I like that my uncle lifted me over his head so that I could feel his power; I think he is a titanic immortal."

Now that's a unique perspective from a young mind that has quickly become my favorite compliment ever from The Middle Kingdom, i.e., China, and the most undeserving. From future hero Jason, kindhearted, genius son of a close friend 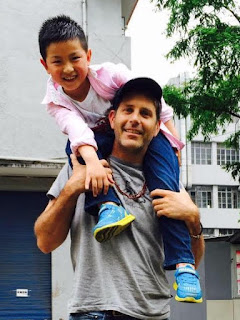