Psychedelic Elephant in the Newsroom... 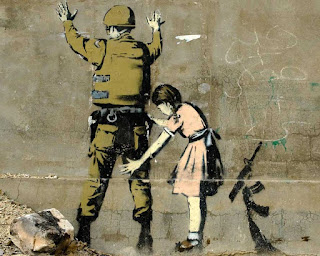 Hopefully, no one minds if I rush headlong into the pungent gun control discussion and add a few piasters to the kitty…actually two Indian rupees are equal to ~1.3 US cents for what it’s worth, i.e., less than anyone else’s ante. If you might bear with me, I'll try to provide perspective from the side of people resisting gun control...
...including someone even like me, a paz-ifist and non-eater of animal flesh. Idealistically, you might perhaps imagine that a pacifist and vegetarian sees no need for weapons period, full stop, worldwide--except under the rare exception of self-defense. Or, is self-defense really that rare and from whom is the biggest threat…any guess at mortacracy numbers of just last century, that is death by government, aka, democide. Hint: consider China, the U.S.S.R., Germany, North Korea, Cambodia…and what they might have had in common.
Even in the USA, the ruling class (of ‘elected employees’ although they don’t act the part) who have attained power and govern have revealed themselves to be less than worthy of trust—examples are endless and examples can be tragically lethal. Therefore, if they want gun control for the public, I would even say, 'sure, that’s fine', under one simple condition—they go (disarm) first.
Instead, they are surrounded by bodyguards with 'peacemakers' i.e., guns, and protected at taxpayer expense while still allowing the US to be the greatest arms dealer worldwide—isn’t it ironic to focus on a relative brush fire at home while being the tinder of devastating infernos abroad—~300,000+ deaths annually by small arms across the globe—'the real weapons of mass destruction' if you go by numbers of deaths (not to mention over a million crippling wounds)—and who is the main supplier? Moreover, dissent is minimal across both sides of the aisle of the U.S. duopoly ('ReBloodlicans' and 'DemoCrips') over the USA's immense culpability of fomenting worldwide gun violence—why does the Military Industrial [Psychosis] Complex receive a bi-partisan green-light in this case? Similarly, "Why look at speck of sawdust in your brother's eye and pay no attention to the plank of timber in your own?" -Matthew 7:3, New Testament 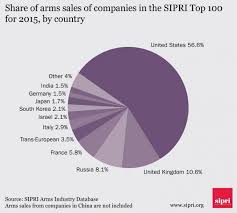 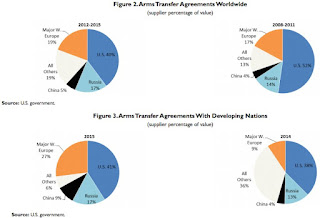 Even in the US, there wasn't a gun problem since the country's inception through relatively recent times of the 1950's, 60's, 70's, 80's and through most of the 90's (Columbine was in 1999)—thereby, is it truly access to guns, proposed as a large part of the problem? Access to guns hasn’t changed for the foreseeable past in the US--they have been around since the beginning of the nation. Is it then the culture that has changed and is a mitigating difference between now and then?
By comparison, the Swiss have abundant arms and few to no mass shootings. On the other hand, Mexico and Brasil have some of the tightest gun control laws in the world and yet they also suffer immense problems with gun violence. Is it then a culture of violence rather than regulation of guns by state powers? Again, guns have been accessible in the USA for the country's entire past--what's changed in the last two decades that school shootings have cropped up when they had not previously…?

Mental health is a salient point to consider--nearly all of the mass shooters were/had been using psychoactive drugs. Seems glaringly relevant--yet has it been discussed much in Big Media? The talking heads seem loathe to cover the topic. Do their minders make them avoid the psychedelic elephant in the newsroom--any wonder the topic is evaded when some of the largest if not the largest political donors, lobbyists and corporate media advertisers are Big Pharma—they provide a deluge of money--perhaps this money-flow is a greater concern than the monetary issue with gun manufacturers and the NRA. Although the latter are certainly profiting, from my reckoning it’s a bit of a red herring to propose their motive is profit-driven more than steadfastly believing in the Bill of Rights--at least NRA members and gun owners themselves resolutely support the Bill of Rights without which gun commerce and other forms of commerce would hardly be possible in the first place. Specifically, for stalwart supporters of the second amendment, from all that I can reckon, it’s more of an issue of trust in faceless, distant bureaucrats than the ability to make a fistful of greenbacks selling guns.

With more gun control regulation, the state, in effect, is suggesting that it can and will protect the public—and yet they egregiously did little to protect the students in Parkland—this, despite numerous opportunities to do so along the way from the school itself to local, state and federal personnel and agencies who had clearly actionable information—they oddly seemed to go out of their way to avoid doing anything--why trust such a state, and why willingly give up any rights to it, or, in effect, invite the state apparatus to have more authority in one’s life?
Besides that, weren't there laws in place that would have prevented Parkland and beyond had they actually been followed…would additional regulations and controls presumably be more efficacious and if so, why would they be when the previous ones were not?
Paradoxically, aren’t many people also very concerned with "social justice" and police abuse of authority and wouldn’t gun control increase state control and subsequently police power…? 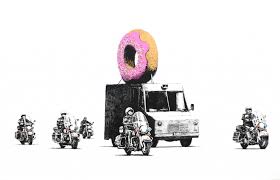 That is, how to trust a labyrinthine state that regularly misleads if not outright lies (WMD for one, etc etc etc) and with widespread lethal consequences of their lies (can anyone name countries we’ve been bombing on nearly a daily basis over the last 16 or so years and using borrowed money to wage the aggressive foreign interventions and ‘nation building’ endeavors..or perhaps name just the seven countries bombed throughout 2016 at an average of 3 bombs per hour over 24 hours a day multiplied by the whole year...?).

Some of the government's most lethal agencies misrepresent the truth, i.e., lie, professionally. The terrifying part is that they operate without oversight and the public is largely ignorant. In other words, they get away with it. Idaho's own Frank Church, an admirable politician of great character, warned of this deceit and lack of supervision way back in the 1970's when surveillance technology and attendant powers were in relative infancy and referred to the growing powers of clandestine agencies without oversight as an 'abyss from which there can be no return’.

Since then, they have had decades to secretly ply their craft and increase their powers and have become especially intractable with an unimaginable surveillance apparatus and terrible powers while willfully lying to congress to whom they are mandated not to lie. Even the Gang of Eight (congressmen) who provide a toothless review of the intelligence agencies have long been a rubber stamp while these agencies secretly run roughshod over the globe and at home, too, using endless taxpayer money and resources for lethal clandestine machinations about which the other branches of government are clueless--check and balance is horrifyingly absent.

Therefore, it really is a trust issue when it comes to the public and the state apparatus, especially the shadow agencies within it that have little to no oversight.

If it beggars belief, well, democide (death by government) can hardly be overlooked. It may seem far-fetched, but it’s actually not. Death by government has been too common. Tragic examples from the 20th century alone account for 260,000,000 million deaths including from the following regimes  China (PRC), USSR, China (KMT), China (Mao Soviets), Germany (’33-’45), North Korea, Khmer Rouge Cambodia, Cuba and so forth. How does democide even begin--that is, how can 'the state' turn on its people? Well, it emerges by the ruling elite believing that they deserve to serve themselves and they know best and are entitled to overmaster the people and squelch dissent. In other words, stripping rights from the people and stripping the people's voices and means of standing up for themselves (putting them in an abyss of sorts from which they cannot plausibly push back). 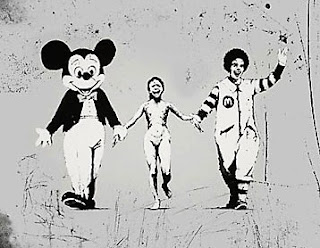 The crux may be this. Many citizens do not want to place their full trust in state power, and why should they? Regardless of whether the state would theoretically be capable of using all of its powers judiciously, too many lethal counter-examples exist of power corrupting--even if it's only a very small percentage of tainted apples in the whole, vast orchard (although, in the USA, a shadow seems to be cast over the whole orchard). It’s a self-defense issue for many--in the most basic of terms, 'a slave with a gun is no longer a slave'. 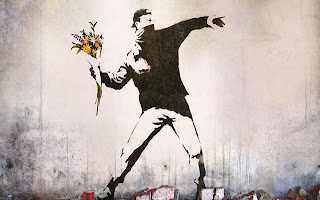 Still, politicians and celebrities are surrounded by armed bodyguards at secured venues (please never forget that politicians and officials/ex-officials, e.g., current and former Supreme Court Justices, are provided around-the-clock armed protection at taxpayer expense) and reside in secluded, walled mansions. Is it hypocritical of them to gently encourage gun control (for others) while encircled by their own security and bodyguards with ‘peacemakers’. 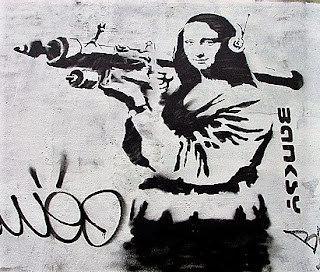 Still, I’m ready to idealistically disarm the whole world even if bipartisan support (both 'ReBloodlicans' and 'DemoCrips') is supplying the same world with arms including unstable countries (again, ~300,000+ deaths a year by small arms—'the real weapons of mass destruction'?) and sewing lethal bedlam. Their lip service about gun control at home belies the deathly chaos instigated abroad---supplying the world with arms if not actively engaging in aggressive wars (using borrowed money to wage them, and borrowed karma, too?).
Sure why not disarm, under one condition.  (Untrustworthy) government goes first. 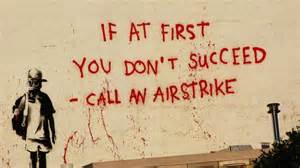 By the by, stats on death by sugary, fizzy cola ('Caca-Culo') are fairly interesting by relative comparison...#CacaCulo #CocaCola #SugarFree #venom

Sugary Drinks Linked to 25,000 Deaths in the US Each Year
http://www.latimes.com/science/sciencenow/la-sci-sn-sugary-soda-death-toll-20150629-story.html