Burning Man's Glitzy BS? (i.e., all that glitters in the desert is not the fabled 'sharing economy')

(The following is a response to Burning Man Turns 30: the Joys, Pitfalls (and Drugs) of Hollywood's "Vacation for the Soul" , published in The Hollywood Reporter, 26 August 2016) 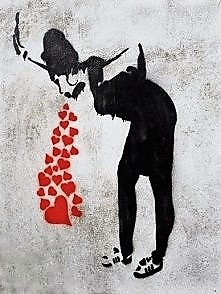 If Burners (Burning Man event participants) and Burning Man event organizers overlook the high price of an entry ticket ($390 to $1200), the mad desert blowout might then possibly be considered a ‘non-commercial’ arena.

Does it take a special kind of enlightened soul to not see right through the astronomical entry fees? In other words, the event grounds can be legitimately non-commercial only if the event itself is free of cost (after expenses) -- yet, participants and organizers willingly overlook blatant profiteering from the get-go of purchasing a wildly overpriced entry ticket. Thereafter, they pretend to engage in a 'sharing economy' while frolicking with the fruits of the market economy that they bring along with them to erect an imaginary Elysium and play in it.

Can festival ravers possibly imagine that it marvelously appears out of non-commercial thin air including 'a half-million dollar sound-system' on a Playa (nickname of the dusty event grounds) shuttle bus, lavish costumes with nifty sequins and niftier body paint and glitter, camping/desert survival gear, decorated bicycles and requisite swank sunglasses, ice-chests filled with highly processed ‘health foods’ and stylish beverages like coconut water imported on gasoline fumes from halfway around an ailing globe (paradoxically, desert-stormers overlook inconvenient ‘carbon footprints’ in the parched sands for a week of indulgence while holding everyone else accountable the other 51 weeks). From waffles to building materials for temples and other structures erected magnificently where there were none…apparently, the loins of the gods opened up and shed extreme, albeit transient, favor on the sand-bitten spectacle…about as free of cost as it is free of environmental concerns.

Is overlooking ecology concerns and high-finance robbery a hidden charade that keeps Burners from the despair of a lethal cognitive dissonance? Hypocrisy is a pox that is desperately banished by chic flower children of the new millennium and their faddish predecessors from the sixties onward--even when that means burying heady egos deep into the sands of time. Nevertheless, the artifice that there is no cost because, well, you know, those fluffy waffles taste ‘super amazing!’ and the ‘super awesome!’ Elvis lookalike chefs gave them out liberally to all who showed up in (mandatory) hipster garb after passing through high-dollar entry gates (yep, gates and barriers that anywhere else are a riot-worthy no-no...yes, gates are apparently acceptable when they serve those who reckon them necessary for a diamond-studded bottom line). The gathering Hive Mind is shepherded through by a semi-clothed to buck-nude and perma-smiling "Welcome Home!" posse processing a vehicle lineup of exclusive ticket holders for up to a week's worth of the world's finest groupthink disguised as non-conformity en masse (imagine a week-long, outdoor TED talk inflated by steroids potent psychedelics and spiced up with various degrees of nudity and too-cool-for-school DJs). 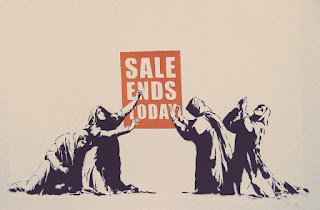 The expenses of carousing the Playa are presumed to be counterbalanced by one’s own 'giveaways'…except perish the thought, any thought of cost-analysis and payback reciprocity -- ledgers do not exist here (of course, organizers and ticket-takers exempted). Moreover, those who do not have anything to contribute are shunned. Yes, at this ephemeral utopia of 'peace and love', those who are presumed to have nothing en vogue to give are ostracized and judged as not worthy of the peacocky affair in the desert (revealing a haughty band of neo-hippies espousing a limited brand of neo-"peace and love"?).

If lusty BM colonialists truly want to believe in smarmy non-commercial ideals then dump nearly everything procured beforehand (and hauled in overloaded vehicles from sports utility vehicles to motor homes and even private aircraft). Enjoy nature without the rewards of commercialism, e.g., pricey foods and party enhancements stockpiled before the ‘non-commercial’ jubilee kicks off.

Despite wishes to make it so, simply calling the event ‘commercial-free’ will not marvelously render Burning Man a 'sharing economy'. Otherwise, to begin to do so, for starters, attendees also might make a pilgrimage to Black Rock City (name of the conurbation that crops up at the event site otherwise known as Black Rock Desert) by self-propulsion (saving pilgrims the despair of using decried petrochemicals in the aforementioned petrol-guzzling vehicles with a massive carbon footprint tread-print or even skyward contrail for the airborne).

How long could this trendy mob of pretentious mother-huggers (and grandmother huggers) then live off the land before starving to death or dying of thirst? Could they gather under a billion stars at night and enjoy music created naturally without electricity, without posh sound systems and without instruments forged through a despised industrialization that they cannot escape no matter how they portray it all as an iconoclastic Promised Land…farcically labeled commercial-free?

Is it asking too much for the wild-eyed participants to look beyond the molding-board thin façade of a faux social paradise relying on free-market underpinnings? Dare the verboten word capitalism even be uttered-- capitalist underpinnings from transportation to and from airport hubs and on to the venue to keeping Burners well-dined and wined (and fuzzy brained), costumed, comfortable and entertained while there, all with a robust entry-ticket price tag?

If not, then call it an exercise in inconvenient duplicity. Meanwhile, the gala is growing in size and cost while paradoxically its downfall is decried by condescending, ageing Burners (who remarkably resemble current, cookie-cutter Burners -- the article's photo of Katy Perry reveals a swank outfit that could be that of every other female participant at this ironically nonconformist event). The downfall is partly blamed on Photoshop’d Instagram propaganda (and yes, the Amazon Studio exec's photo in the article is obviously enhanced to make it more dreamy despite a herd of sheeple milling in the background -- difficult to recognize chichi Katy Perry in a madding artistic gulag of similarly outfitted renegade nonconformists and professional wannabe hipsters. (Inconvenient irony, too?)

If only Trader Joes', Whole Foods, Wild Oats, Fresh & Easy et al participated in the merrymaking bonanza by supplying factory-processed munchies out of the goodness of their non-commercial hearts…then every hipster could reduce costs significantly and live happily trendy ever after…at least for that week of revelry while supplies held out at this fiery New Age potlatch.